The “Rosa Damascena”, also known as “oil-bearing rose”, was brought to Bulgaria over four centuries ago by merchants. The valley along the southern slopes of the Balkan range and Sredna Gora mountain provided perfect climate conditions for growing roses and became soon known as the Bulgarian Rose Valley. Through the centuries the Bulgarian rose has developed into its own species by increasing its oil yield as well as its quality. By the 19th century Bulgaria became the largest rose oil producer in the world. Through Communism the privately owned land and distilleries became nationalized and production declined. Today, Bulgaria produces around 75 % of the rose oil world wide. 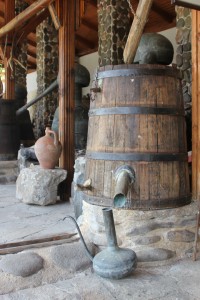 This is an original distillery from back in the day. It can hold about 50 kg of rose petals. The water was heated by fire and the steam would pick up the oil molecules. When the steam hits the mushroom-like top it starts cooling down and takes the oil with it along the pipe to the wooden barrel where it is cooled down completely and condensates. Finally the water-oil-mixture is collected and separated. Most people are familiar with rose water, but this really is the by-product when producing rose oil. Back then traders would exchange one kilo of rose oil for one kilo of gold! This is not surprising when you realize that it takes about 4000 kg of rose blossoms to produce 1 kg of rose oil. 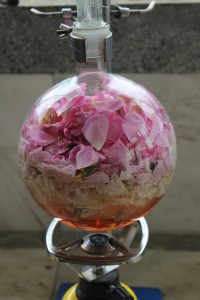 Rose oil is mainly used in high end cosmetics and perfumes with France being the biggest purchaser, followed by the USA and Japan. Christian Dior, Nina Ricci, Kenzo, Givenchy and Gucci are among the world-famous brands that all refine rose oil as an essential ingredient for their fragrances but undoubtly the most famous perfume containing Bulgarian rose oil is Chanel No. 5.

In the past years the usage of rose oil in  the pharmaceutical industry and food industry has been witnessed, especially in Japan and the Arab countries.